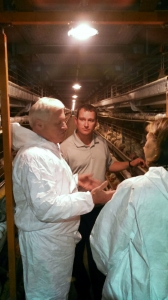 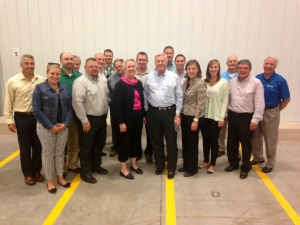 Playing it safe with eggs 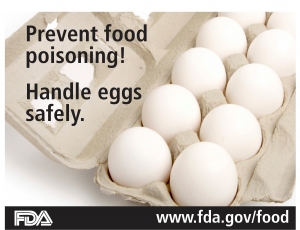 What You Need to Know

Fresh eggs must be handled carefully to avoid the possibility of foodborne illness, often called “food poisoning.” Even eggs with clean, uncracked shells may occasionally contain bacteria called Salmonella that can cause an intestinal infection.

The U.S. Food and Drug Administration (FDA) estimates that 142,000 illnesses each year are caused by consuming eggs contaminated with Salmonella. FDA has put regulations in place to help prevent contamination of eggs on the farm and during shipping and storage. But consumers play a key role in preventing illness associated with eggs. In fact, the most effective way to prevent egg-related illness is by knowing how to buy, store, handle and cook eggs — or foods that contain them — safely. Click on the following link to learn some safe handling tips that will help protect yourself and your family.

Celebrating at the Litchfield Watercade Parade

We kicked off our 60th anniversary celebration at the Litchfield Watercade kiddie parade this morning. Henrietta hen and some egg friends were there! 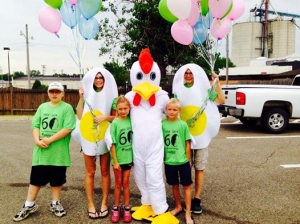 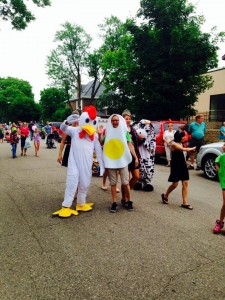 What an absolute blast at the Watercade parade tonight! 100 walkers having great fun in the sun! 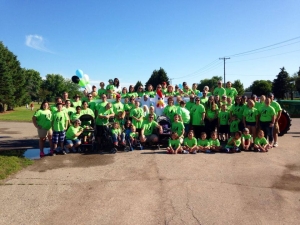 Well the wind got the best of us and the Watercade little crow ski show was postponed but not before we handed out hundreds of free ‘eggs on a stick’ (hard boiled egg on a pretzel) and had people try their hand at a few fun games. What a great way to wrap up a terrific weekend!!! 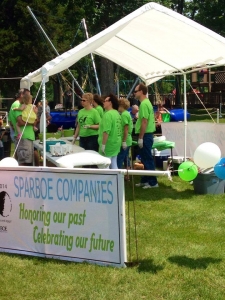 Honored as grand marshal of the 2014 Litchfield Watercade parade, an annual community event in the company’s “hometown” of Litchfield, Minn., Sparboe Farms was recently highlighted by the local newspaper Litchfield Independent Review in “60 Years Strong as Member of Community.” President Beth Schnell talks candidly about receiving this recognition. Read the full story. 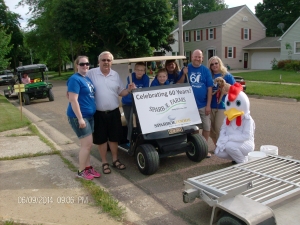 On Wednesday, the Egg Industry Center released a landmark study that shows that while the U.S. egg production has increased over the past 50 years, the industry has also been able to significantly decrease its environmental footprint. Researchers conducted a lifecycle analysis of U.S. egg production from 1960 to 2010 to evaluate environmental performance measures for the complete lifecycle from crops to hens to the farm gate. Study findings indicate that the environmental efficiencies are the result of a wide range of factors, including the reduction of natural resource use, improved hen feed, better disease control, and advancements in hen housing systems.

“The U.S. egg industry has evolved remarkably over the past five decades by incorporating new technologies to protect natural resources,” said Hongwei Xin, agricultural and biosystems engineering and animal science professor at Iowa State University, director of the Egg Industry Center and the study’s lead researcher. “Egg farmers have improved their production practices, allowing them to provide an affordable source of high-quality protein while using fewer resources and producing less waste.”

Key results of the study found that compared to 1960:

A Closer Look at the Findings

Due to increased feed efficiency, advancements in hen housing and manure management, egg farms now use less water and energy on a daily basis and release less polluting emissions. Every aspect of the egg production process, from cultivating feed to raising the laying hens, has led to a reduced environmental footprint.

With the growing U.S. population and egg demand on the rise, egg farmers play an important role in providing an abundant and affordable source of high-quality protein.

“The U.S. population has increased by 72 percent over the past 50 years, but efficiencies in egg production have enabled us to meet the demands of the growing population with just 18 percent more hens, while also leaving a smaller environmental footprint,” said Bob Krouse, an egg farmer for Midwest Poultry Services in Indiana. “Egg farmers are now in a position to help fulfill the growing need for an affordable and nutritious source of protein in an environmentally responsible manner.”

Egg farmers are dedicated to providing safe, nutritious food while maintaining the highest quality care for their hens. At the same time, farmers understand the importance of protecting the land, water and air for their communities and future generations, and they are always looking to identify ways for continued improvement. Efforts to further improve feed efficiency, hen housing facilities and manure management will facilitate even greater environmental footprint reductions in the future.

The study was funded by the American Egg Board, the U.S. Poultry and Egg Association, the United Egg Association — Allied and the Egg Industry Center. To obtain data for 2010, researchers conducted anonymous surveys with egg farmers and collected data on 57.1 million young hens and 92.5 million laying hens. For more information, visit www.incredibleegg.org or www.eggindustrycenter.org

Eggs around the world cooking contest at the Iowa State Fair

Sparboe Farms sponsored the first ever “Eggs around the world” cooking contest at the Iowa State Fair.

Entrants had to make an internationally-inspired dish that used at least 3 eggs.
Judging was on Thursday 8/15 at 10 am and Sparboe Farms’ own Nate Nickolisen and Sheila Baker put their taste buds to work picking the winners.We had 7 dishes entered (which is great for a new contest!) and each judge had to try all 7 and rate them based on presentation, taste and creativity/international inspiration.

The winners took home Visa gift cards and a free coupon for eggs from Dahl’s. Thanks Nate and Sheila for judging! 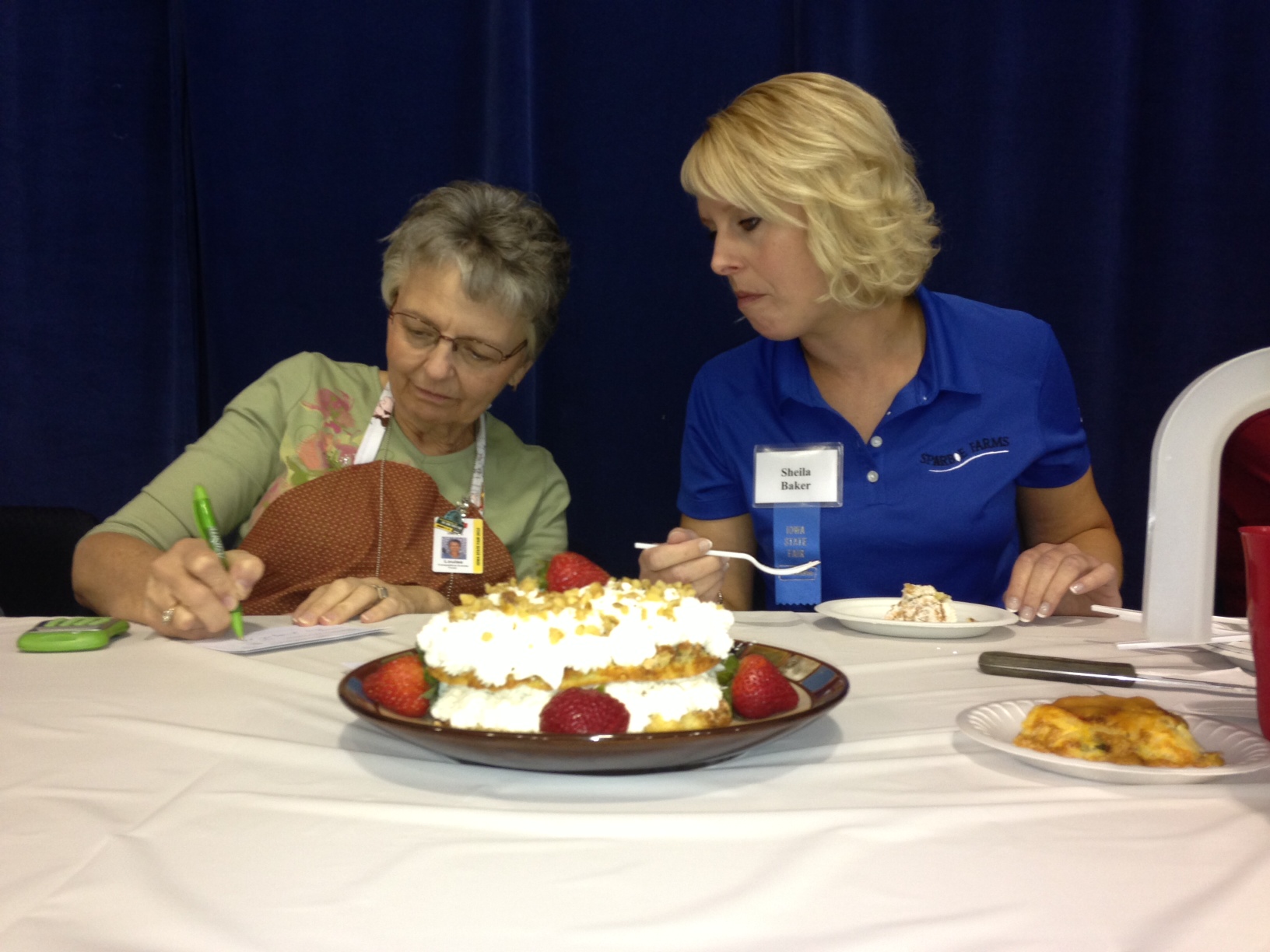 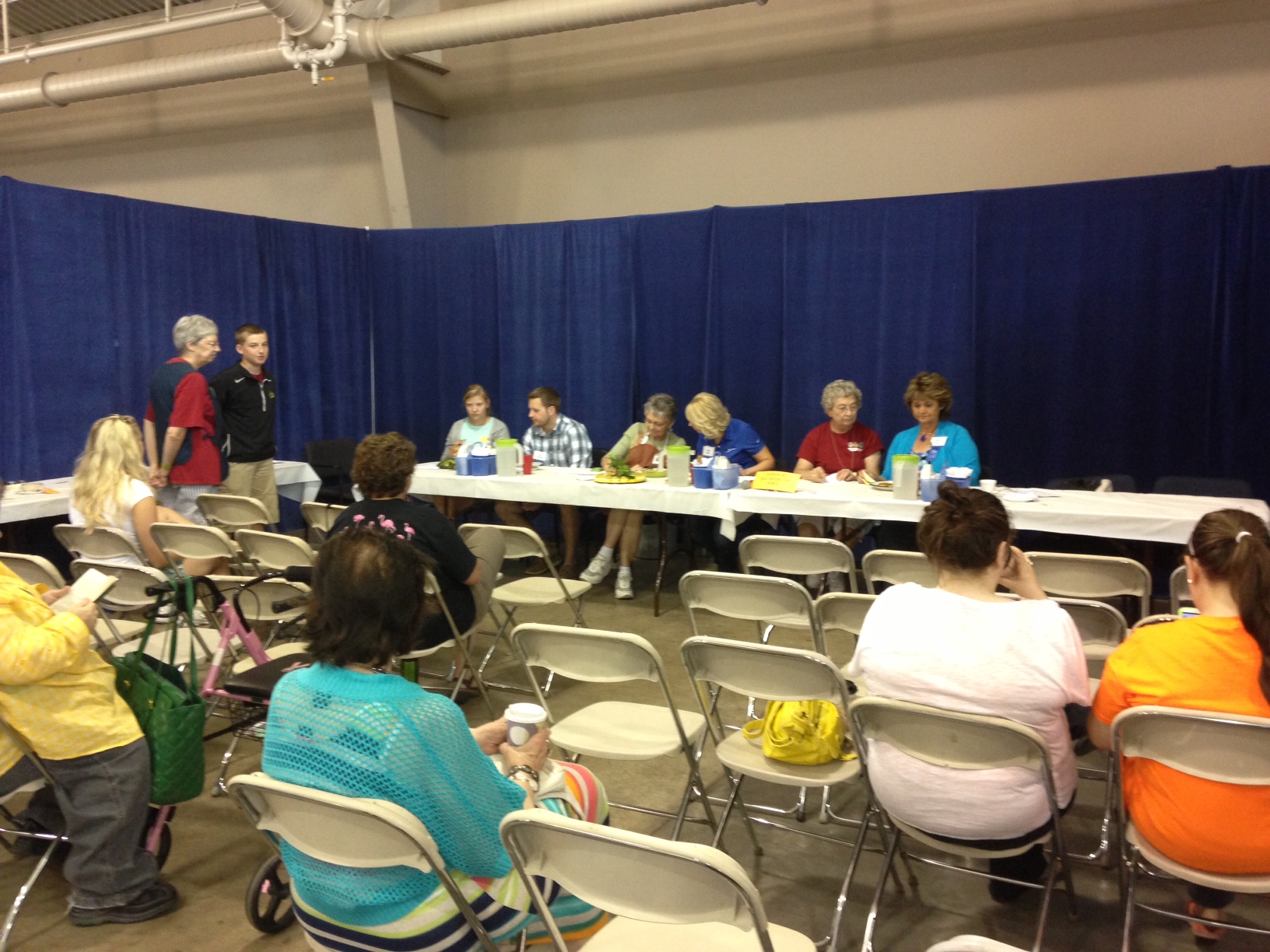 One of Sparboe Farm’s core values is supporting our communities. We do this in many ways, including financial support through our community relations department, employee involvement in community activities and initiatives and by donating eggs to non-profit organizations.
In the month of July, Sparboe Farms donated 23,955 dozen eggs.

19,800 dozen were donated for the Fill the Truck campaign with our customer Fareway. The eggs were distributed to 8 food banks throughout Iowa and then went to local food pantries nearby Fareway’s stores.

2700 dozen were donated as part of our monthly pallet donation to food banks in Minnesota, Iowa and Colorado. This program has been in place since 2006 and to date we have donated 2.2 million dozen eggs.

Our donations enable these groups to raise money for their important causes, including supporting a school in Haiti, donating money to needy families in the local community, fighting disease and preserving lakes.

We are proud to be able to share our wholesome high-protein eggs with families in need. 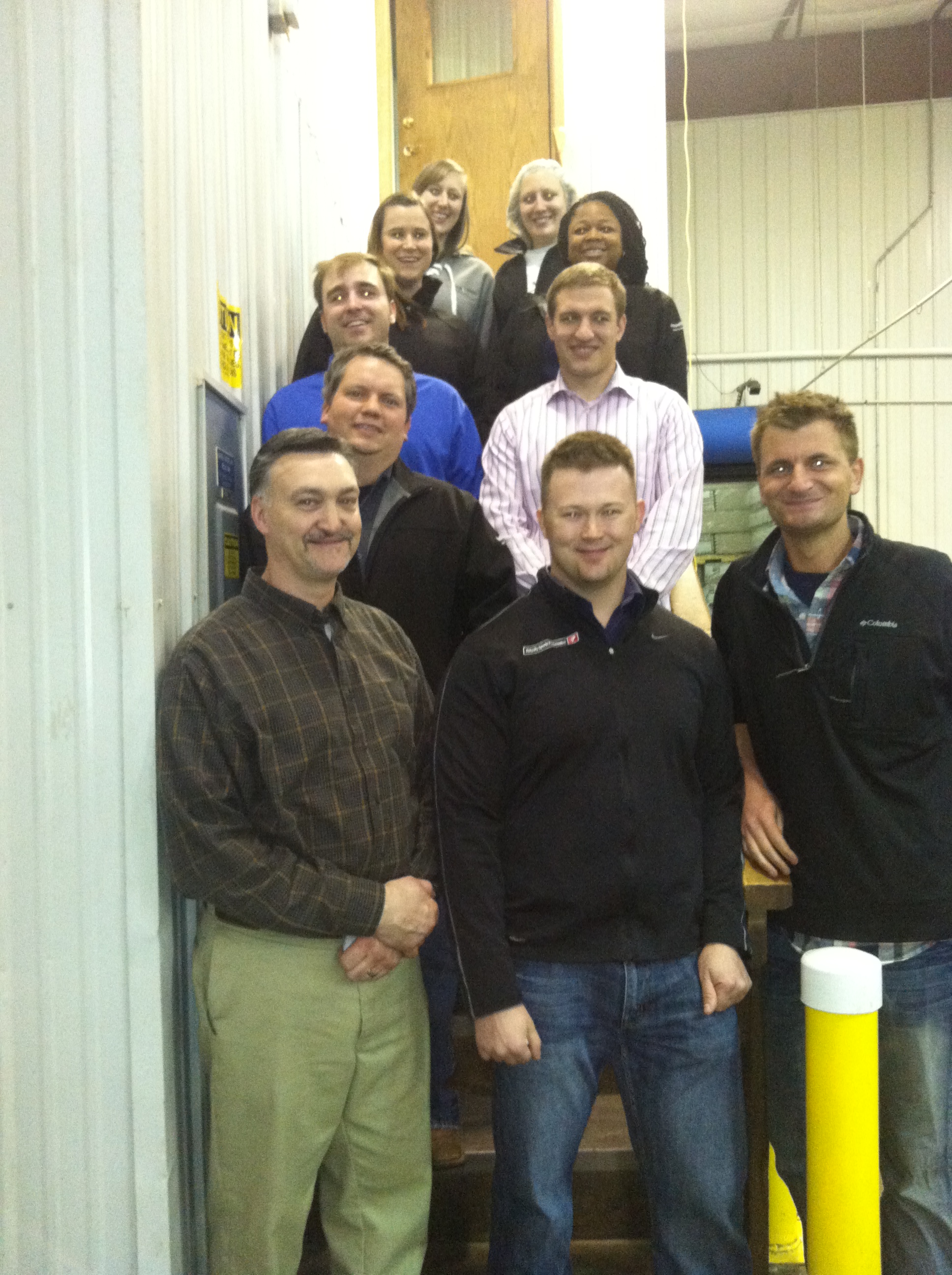 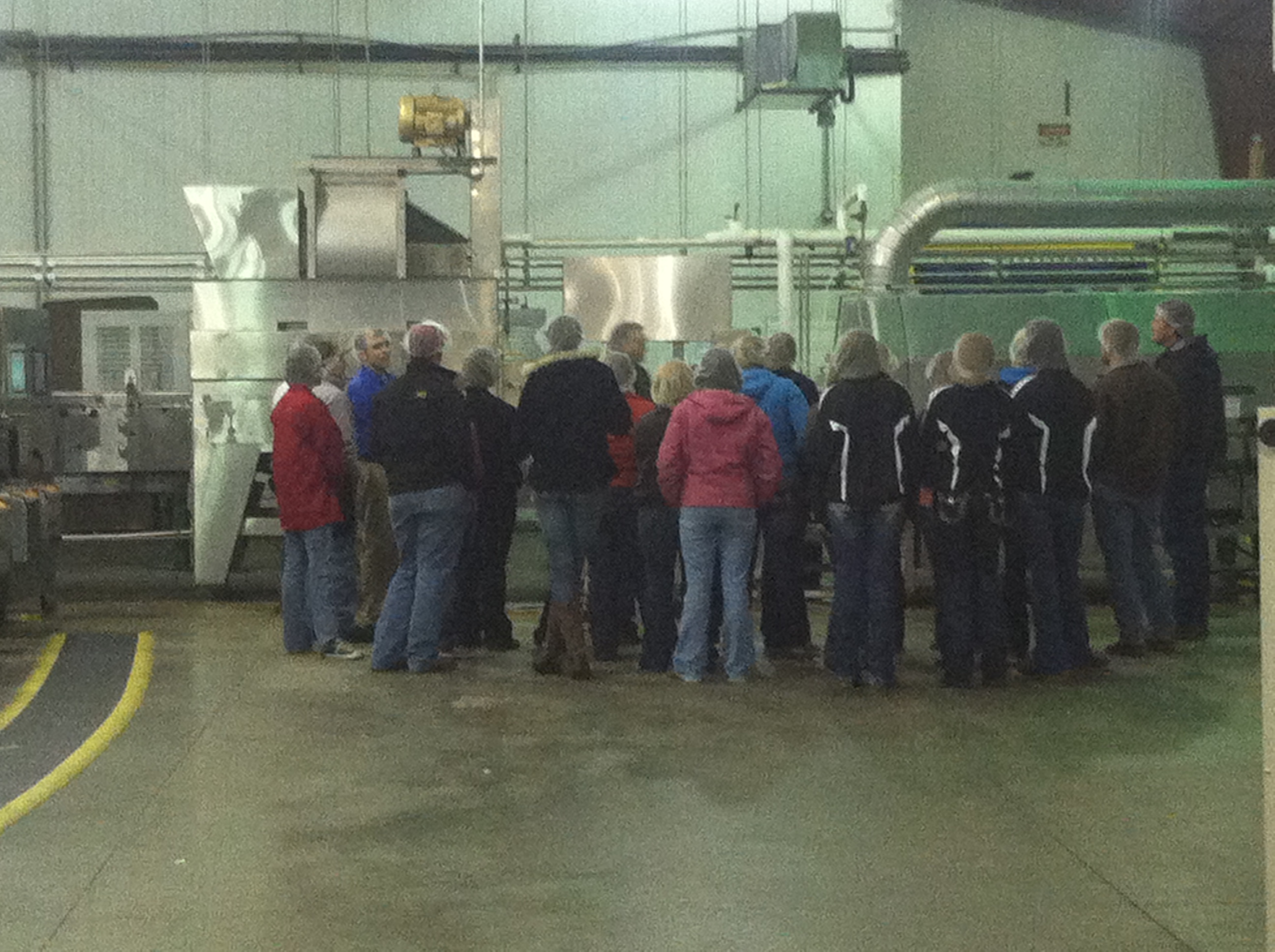 On Friday, April 5th, 94 members from the National Block and Bridle Club visited our farm in Iowa. The visitors were college students from all over the country. Learn more about Block and Bridle here. Our team of hosts from Sparboe Farms made sure the event was a success!

Our Processing Manager showed the students around the processing floor, explaining to them the process of how the eggs come in from the barn all the way to when they are packed into boxes for our customers. Then the students visited our Quality Assurance Manager at the candling booth to learn about egg quality and quality control, yolk color and how feed impacts the eggs.

Next was our live production station where we covered some information about Sparboe Farms, the farm, and animal welfare. Finally, our Production Manager met the students outside and walked with them around the farm. He talked to them about our farm land, manure and water management, feed bins and ventilation.

A big thank you to the entire team at the farm for hosting such a large group and for making sure the farm looked its best!